What is LTL Freight?

The acronym LTL stands for Less-Than-Truckload.  LTL Freight is a shipping method that allows shippers to tender freight that will be transported on semi-trucks that are also transporting cargo from other shippers.  In this scenario shippers share the cost of the transportation, much the same way that the cost is shared when sending a package via the postal system or a parcel carrier like FedEx, Purolator or UPS.  The transportation networks of most LTL carriers are similar to parcel carriers in that they operate a spoke and hub system.  Freight is retrieved from the shipper and taken to a terminal where it is unloaded and crossed docked onto other semi-trucks containing cargo heading in the same direction.  Ultimately the freight is delivered to the destination terminal where it is cross docked for a final time and placed on the truck that will make the delivery.

When to offer it as an option

While there isn’t a limit on how small an LTL freight shipment can be, economically it falls in-between the parcel and truckload (TL) shipping methods.  Generally, LTL freight can be a more economical option than parcel when the total weight of the shipment exceeds 150 LBS.  It tends to become less economical than truckload freight when more than 50% of the semi-trailer would be used to transport the shipment.  There are many factors that determine the cost of an LTL shipment, so which shipment method is more economical will vary by circumstance.  If you have orders that can ship with a parcel carrier that weigh more than 150 LBS, adding an option for LTL freight may offer your shopper a more affordable alternative and have a positive impact on your conversion rate.

They aren't all the same

There are many LTL freight carriers.  According to JOC.com, in 2016 the top 25 carriers account for about 90% of the annual revenue for the transportation segment. LTL carriers fall into 3 general categories:

National carriers originate and deliver shipments throughout the United States or Canada using their own networks.

Regional carriers provide service in a limited number of states or provinces.  Typically the number of states can be described as a general area such as the Northeast, Southeast, Midwest, Southwest, or West.  To help extend their networks, regional carriers will often have reciprocal agreements with other regional carriers that share a service area border, a practice called interlining.     Interlining can give a regional carrier national reach, but the handling of damage claims and unfavorable interline pricing are frequently cited as disadvantages to this arrangement.

2016 REVENUE, INCLUDING SURCHARGES, in millions of dollars.

National carriers tend to have better technology and a larger investment in technology infrastructure.  This provides eCommerce merchants the ability to reliably retrieve LTL shipping rates for use in their checkout process.

Price will play a significant role when choosing a carrier, but it shouldn’t be the only criteria.  Other suggested areas of evaluation include pickup times, percentage of on-time deliveries, damage rates, average time to settle claims, and carrier limits of liability.

The tariff governs the rates

LTL carriers use tariffs to communicate transportation rates, fees for additional services, terms of service and many other things.  It is common for transportation rates to be very heavily discounted. For example, new UPS account holders are extended a 60% discount even without any LTL freight volume.  Deeper discounts are extended to companies with higher LTL freight volumes.

It’s common for LTL freight account holders to make the mistake of being enamored with the size of the discount percentage being offered.  A 70% discount offered by one carrier may sound better than a 65% discount offered by another, but if the list price is substantially higher your net cost may be lower with the carrier offering the lesser discount.

Lift gate is a hydraulic lift attached to the back of a truck.  On a delivery, it is used to move the freight from the truck down to the street level. 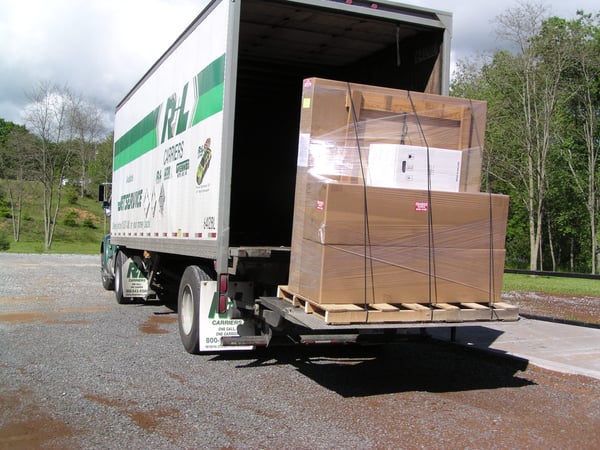 If your eCommerce store ships frequently to residential addresses you should ask about the percentage of the carrier’s fleet that is equipped with lift gates.  Carriers with lift gates on a high percentage of their trucks are in a better position to make timely deliveries to residential addresses or business that don’t have a loading dock.  Otherwise your shipment may sit at the delivery terminal for days waiting for a properly equipped truck to become available.

You may have success negotiating the fees for additional services.  Some carriers are more flexible with these fees which can be well over $100 in many cases. Shopping for the best fee structure may be as important as negotiating the discount on transportation charges.

Getting a rate quote

The information you need

To obtain an LTL quote, the following information is required:

The weight of the shipment must include the packaging materials used to create the shipment.  This includes pallets, crates, boxes, shrink wrap and any other materials.

How to identify freight classes

Other resources for discovering the freight classes of your products include:

Carriers routinely audit shipments tendered to their network and will re-class the shipment’s freight class if they believe it is incorrect.  This can cause a significant change in the amount billed for the shipment.  Properly identifying your freight classes is an important step in making sure that the amount you collect for shipping matches what you pay for shipping.

What you need to know

There are two topics that need to be tackled to introduce LTL freight to your eCommerce store:

Call for a quote

The most basic way is to provide customers with LTL freight quotes is to direct them to “Call for a quote”.  This approach is common but interrupts the purchase process.  It prevents the online store from capturing revenue 24/7, and can have a significant negative impact on order conversion rates. Preventing customers from checking out when you don't have personnel in the office defeats one of the primary reasons for having an online store.

The next step up in sophistication is to have a table driven rating engine.  This method usually results in grossly inaccurate rates and wildly impacts merchant profitability.  Pricing methodologies vary by carrier, but generally speaking pricing is determined by lanes.  Lanes are defined by origin and destination combinations.  Some carriers use states for this purpose, resulting in 2,704 ZIP code combinations times 19 freight classes resulting in a minimum of 51,376 data points of static data per shipment weight.  If the carrier uses ZIP codes to define lanes, there is a minimum of over 35 billion data points of static data, per shipment weight.  The minute there is a change to the rates, perhaps due to a simple update to the fuel surcharge which is typically a monthly occurrence, the whole table is rendered inaccurate.  Keeping up with these changes, assuming the table is created accurately the first time, is unmanageable.

Use a real-time quoting engine

The most effective way to incorporate LTL freight quotes into your eCommerce store is to use a product which retrieves real-time quotes.  The complexity of managing the rate matrix is left to the carrier to manage.  Eniture Technology pioneered this solution with the introduction of its family of LTL Freight Quotes products.  Each time LTL freight is an option for a cart, the LTL Freight Quotes product sends the details of the order to the associated LTL carrier, processes the response and displays a precisely accurate rate estimate as a shipping option to the shopper.

The second topic to tackle is how to process the actual shipments.  The most basic method is to use the carrier website to generate the Bill Of Lading and schedule the pickup.  This is a good solution for eCommerce stores with lower LTL shipment volumes.  The solution is free but data propagation is manual.  If you have a higher volume of LTL freight shipments that makes manual data input impractical, you should search for integrated solutions for your eCommerce platform.  These solutions will import the order details, eliminating the need to type in the From and To addresses, and minimize the amount of data required to ultimately generate the Bill Of Lading. Your LTL carrier may also have solutions, so be sure to inquire.  If you can’t find a solution, contact Eniture Technology to discuss a custom solution.

LTL freight can be daunting for online merchants and agencies who are unfamiliar with it. Use the form to the right to subscribe to our blog.  You'll learn more about how to use LTL freight as a valuable component of your online store.

Eniture Technology is committed to helping online merchants grow their business by executing proven strategies for inbound marketing, creating custom solutions for unique challenges, and offering affordable off-the-shelf products that boost conversions and revenue. It is what we do.  This is one of many educational articles that I hope helps you achieve your goals!